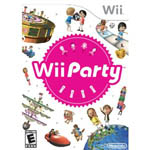 Wii Party is a video game for use with the Nintendo Wii.

(If your family doesn’t have a Nintendo Wii and instead has an Xbox 360, then you should check out the new Kinect and see our list of all the video games available for Kinect on Xbox360).

With Wii Party, the whole family stars in its own electronic board game. Games are fun for 1 to 4 players. Most video games have you focused on the TV screen but with Wii Party Players have to interact with one another in real life to get the results they want in the game. The Wii Party game is a game that changes the way people interact with other players.

Some games require cooperation and others are competitive. There are 13 different party game modes and 70+ minigames, Wii Party can be enjoyed by everyone in the family, regardless of age. This can be lots of fun at parties and gatherings. Even people who are not your “typical video gamer” can get into the fun. Many of the games are simple to learn and a game can last as short as a few minutes if people don’t want to commit to “hours of gaming”. At the same time, with over 70 mini games included, there’s plenty of variety and fun to go around if you want to game for hours.