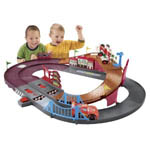 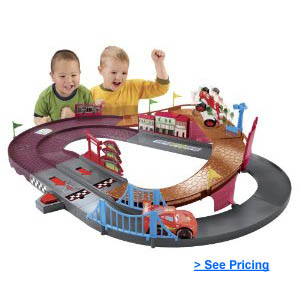 The Fisher Price Shake and Go Disney/Pixar Cars 2 World Grand Prix Speedway is a fun racetrack for young kids. This toy is rated for kids 36 months up to around age 7 years old, but as you can see from the video below, even kids as young as 1 year old will get excited to see this go!

We bought this for our 5 year old boy who LOVES anything with the characters from the Disney “Cars” movie. He loved it as expected. What surprised me is how much his younger sister and our 1 year old enjoy this toy.

Older kids will play with this toy the “correct” way by shaking up the cars, hearing the engine sound effects “vroom – vroom”, and then race the cars on the track. The cars can be raced on any hard surface, not just the track, so this gives some variety in playing with the toy. Disney also sells the “shake and go” cars individually, but I found this set which includes the race track and two cars to be a great deal.

Our one year old enjoys watch the older kids race the cars around the track. Since the cars have an on/off switch on the bottom, when the cars are “off”, he enjoys just pushing the cars around with his hand and making his own “vroom – vroom” sound effects!

This is a simple race track that older kids would probably get bored with quickly, but for younger kids up to around age 7 years old, this toy is a winner!

The new Disney Movie “Tangled” is getting great reviews. Surely the Disney Tangled Rapunzel Doll will be on the Christmas wish list for many little girls this year.

The new Disney Movie “Tangled” is getting great reviews. Surely the Disney Tangled Rapunzel Doll will be on the Christmas wish list for many little girls this year. This doll is on it’s way to quickly becoming one of the best toys for girls in 2010 and is currently ranked within the Top #50 Best Selling Toys on Amazon.

The Rapunzel doll is 12 inches tall with long hair and shimmering highlights that stretch for 17 inches. She also comes with a hair brush of course.

Suggested for kids 3 year old and up.

is a popular game for girls who love all things “Princess”. This game is great for age 4 to 7 year old girls.

This game is for use on the LeapFrog Leapster 2 Learning Game System.

The Leapster learning system is a great educational toy and is perfect for traveling and those long car rides. This game features Ariel and Belle and helps kids to learn spelling, counting, matching, letter sounds, addition and subtraction. The variety of games and adventures with the Disney Princesses make it fun to learn these reading and math skills.

Disney has put a new twist on the classic game of “tag” this year with the new Wild Planet Micky’s Mouse-ke-TAG.  This game is perfects for kids age 3 year old up through about 10 years old.  It is quickly becoming one of the best toys of the holiday season.  One to six players can play and get some physical exercise while learning colors, letters, character names and more.  Perfect to play inside or out.  Check it out!